History of The Wesleyan Chapel - by Valerie King and Ann Read

In the 19th century religious worship was an important part of village life. Congregations were generally large and social events played an integral part. In 1895 the Crawley Down Wesleyan Methodists decided that the time had come to demolish their ‘Iron Chapel’ in Sandy Lane and replace it with a brick built one. The siting of these new chapels and churches were often decided upon by the proximity of the railway, when it was seen that people need not be just within walking distance as in the past. Crawley Down was no exception; a railway station, just a short walk away had been in operation for over thirty years.

The architect, Mr J Rowland Hooper A.R.I.B.A. drew up the plans in Early English style, adapted to suit the dark Rowfant bricks used for the walls. Bath stone dressings relieved the front of the Chapel and a plate tracery window was set into the front wall. The interior had a boarded dado rail with stuccoed walls above and an open timbered roof. To complete the chapel, a rostrum with platform and fixed seats with bench ends for 100 people were included. There was also a school-room adjoining with its own front entrance. Two sets of removable shutters were included into the design so that the two rooms could be made into a larger one when needed. To the rear of the building were the Minister‘s Vestry and a tearoom. Ventilation throughout was by air inlets and a turret. The entire cost of the building including lamps, carpet and insurance, came to £661.14s.1d. Mr Samuel Webber based, at Thorne House, was the builder. The funding for the building was met in a variety of means with many local residents subscribing in varying amounts. One resident donated a thousand bricks and cheques were received from Mrs Locker-Lampson of Rowfant House and Mr T.H.W. Buckley of The Grange. 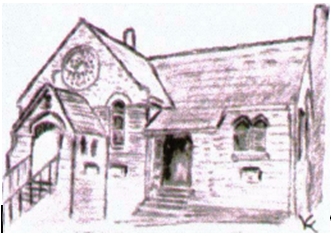 During the building of the Chapel in Sandy Lane,
some documents were put into a bottle
under a foundation stone.